TASTY(!), pure, and free of any colors, preservatives, or extra fillers/additives, MEGA PROTEIN “choco blast” is the best tasting whey protein concentrate available in India! Taste it to believe it!

Whey protein is like a staple in most athletes’ diets for many good reasons.

Accordingly, decades ago, whey protein quickly became the most popular sports supplement on the market, and it continues to dominate best-seller lists everywhere.

When we set out to create MEGA PROTEIN, we wanted to achieve several things.

If you’re like us, you don’t like “wasting” calories on carbs and fat in protein powders. We’d rather eat those calories, not drink them.

We wanted it to be free of artificial sweeteners, flavoring, gluten, MSG, and GMOs

While artificial sweeteners may not be as harmful as some people claim, research suggests that regular consumption of these chemicals may indeed be harmful to our health.

A gluten-free diet is unnecessary for most people, but those with celiac disease or a legitimate gluten sensitivity must avoid all forms of gluten.

MSG is often used to hide the natural bitter flavor of whey, and we’ve chosen not to include it in MEGA PROTEIN.

The safety of MSG is the subject of ongoing scientific discussion, but research has shown that some people experience uncomfortable symptoms upon eating it and that it can be neuroactive in the brain when consumed in high dosages.

And, in general, GMO foods certainly aren’t as dangerous as alarmists would have us believe, but a large number of respected scientists believe more research should be done before we fully integrate them into our food supplies and diets.

Similar to artificial sweeteners, milk from cows treated with such drugs may not be as bad as some people claim, but there is scientific evidence that it may increase the risk of disease in humans.

We wanted it to have an outstanding taste and mouthfeel

Too many all-natural protein powders taste mediocre at best, so we wanted to create something that you will actually look forward to drinking!

MEGA PROTEIN is 100% whey protein concentrate, which might makes it a bit more expensive than some cheap options but guarantees a better-quality product.

You see, the three forms of whey protein sold are whey concentrate, isolate, and hydrolysate.

Now, supplement companies often tell us that we will see better results with whey isolate or hydrolysate than concentrate, but there’s insufficient evidence to support these claims.

And that is why we decided to attain a balance between price, taste, quality, clean label, and hence bring you the best whey protein concentrate you can get!

WHY SHOULDN’T I BUY THE PREMIUM, IMPORTED WHEY BRANDS ON AMAZON OR FLIPKART?

You definitely can, but  just because a whey protein is expensive doesn’t necessarily mean it’s worth it.

Many supplement companies will start with a low-quality concentrate and add small amounts of isolate and hydrolysate to create a “blend.”

Then, in their marketing, they will call attention to the isolate and hydrolysate without telling you that they make up a small portion of each serving.

“Amino spiking” is another common way that protein manufacturers and sellers rip consumers off.

This scam exploits a simple loophole in supplement fact panel laws: you can add certain amino acids to your protein powder and count them toward the total protein count.

This is misleading because protein is a complex chain of different amino acids. There are no proteins that contain only one amino acid.

Why hasn’t this loophole been closed yet then, you wonder?

Your guess is as good as ours.

A good way to protect yourself as a consumer is to check ingredient lists, serving sizes, and amounts of protein per serving before buying.

Ingredients are listed in descending order according to predominance by weight.

So, when you’re considering buying a whey protein powder, look at the order in which the ingredients are listed and the amount of protein per scoop relative to the scoop size.

If a product has milk protein (a low-quality form of protein powder), maltodextrin (a filler), or any ingredient other than whey concentrate, isolate, or hydrolysate listed before the protein powder, don’t buy it.

That means there’s more low-quality protein, maltodextrin, or other fillers in it than protein powder.

Also, if a scoop is 40 grams but there are only 22 grams of protein per serving, don’t buy it unless you know that the other 18 grams are made up of stuff you want.

In many cases, they’re not.

Furthermore, if you see that a protein powder contains any added amino acids, be skeptical.

Many companies will promote this as if it’s a benefit, but in most cases, it adds no value to the product and only means it’s more likely to be amino spiked.

A worthy whey protein powder is easy to spot:

Delicious with no COLORS, food dyes, or CRAP fillers

MEGA PROTEIN Choco Blast tastes great even if it has less than 1% artificial sweeteners and flavors.

This is another reason we opted for a whey concentrate. A Whey Isolate or Hydrolysate powder tastes, well, really pathetic!

However, a concentrate has ​some ​fat and carbs which do not add too many calories, but do rounds up and adds to the taste, making it much easier and enjoyable to drink.​​

If you’re looking for a high-quality, healthy, and tasty whey protein powder, MEGA PROTEIN is hard to beat. 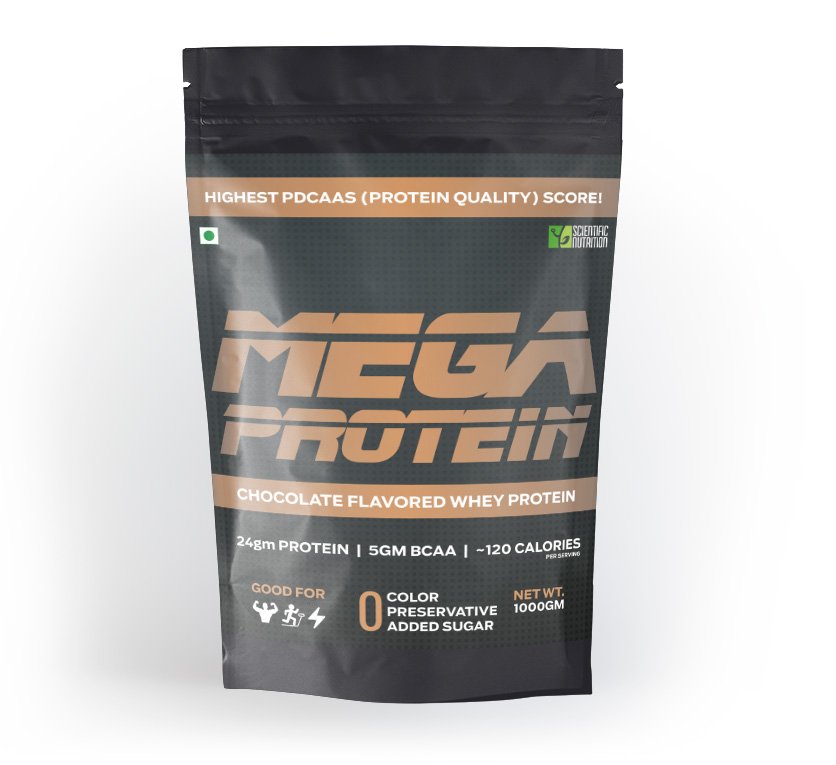 If you want a clean, all-natural, delicious tasting whey protein isolate that’s naturally sweetened and flavored and free of chemicals, GMOs, and hormones, then you want MEGA PROTEIN.